Keeping up with this site and the project it supports can be done by following our Facebook Page, and Twitter Feed.  Any suggestions, questions or comments, please forward them to me here: ifyebreakfaith@gmail.com. 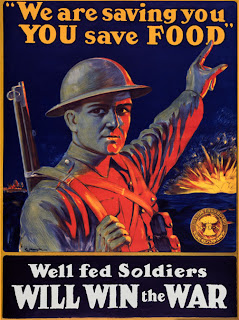 World War One was not the first "Total War", even though that turn of phrase came to define it.  The term means that economy, industry and the civil population are all engaged in efforts to support the country's military actions.  This idea is as old as warfare itself, but perhaps it hadn't been seen on such a scale since before 1914. I don't even think it can even truly be defined as the first industrial war, as the American Civil War was won on the factory floor (the Union's industrial output far overshadowed that of the Confederacy) as much as it was on the battlefields of Antietam and Gettysburg.  It was, however due to the sheer size of the campaigns that required a level of participation on the home front such as never been seen.


For Canada, as with other countries, this required government control of resources in the form of rationing as well as collection of waste material from scrap iron to hog fat for recycling into military materiel.  As so many men were away on the Western Front, essential farming and factory work fell to those who had been previously viewed as unsuited for this type of employment.  In small ways this meant children volunteering for the harvest, but the large benefit was that women for the first time began to enter the workforce as never before.  Even though it was largely understood that women were working for the purpose of the war and because men were absent, the belief was that the status quo would return at the end of the war, this gave rise to the movement that would first secure the vote and eventually lead to the equity of women under the law.


Propaganda directed at civil society expounded the patriotic nature of the duty of civilians to support their country's effort.  This drive took on a monetary nature in  the form of "Victory Bonds", private savings lent to the government for the prosecution of the war, such as the poster I use as my masthead advocates.  These savings did help to provide for the war effort, but didn't prevent Canada from incurring its first national debt.  One way of thinking about it is that we are still paying for the First World War.


Canada's ability to produce resources for the war, from munitions to food and fodder, even a large market for horses, coupled with the supremacy of the Royal Navy to secure lanes of transit helped our young county to come into its own as much as our reputation on the battlefield.


Of course, with all these positive outcomes, there were detractions.  Opportunists and profiteers abounded, some in very secure positions in or strong links to the government.  War, as is often quipped, is good for business so it is not difficult to see how corruption and graft would occur, particularly as the preceding decades were witness to a terrible recession.  Whenever goods are rationed, black markets and hoarders will take advantage, and industrialists will grow rich off of the abundance of secure contracts to produce for the war. 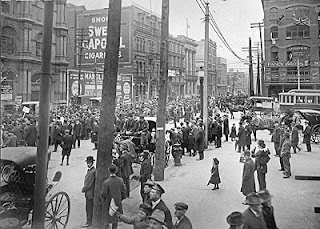 Perhaps the most detrimental and divisive aspect of the Home Front was the issue of conscription.  The struggle to fulfil the commitment of manpower on the front in regards to losses with a lack of appropriate numbers of volunteers inspired the government to pass legislation for conscription in 1917.  This led to protests and riots enacted by groups opposed to involuntary enlistment, especially among the Canadiens who felt marginalised by not having equity of French language regiments, and a deep disdain for participation in what was felt as a British war.  The agitators in this cause mainly had political objectives of their own, not the least being the issue of language laws to protect Francophone interests and even the genesis of the separatist movement, and were using the conscription issue to rally supporters to these objectives.


All of these aspects showed us as a country what we could accomplish when we worked together to a common goal while at the same time that aspects of this cooperation could serve to keep us divided.  It gave us the framework for moving forward during a time of crisis that would also see us through the Second World War a generation later.
Posted by Christopher J Harvie at 05:00