Relief from the Front 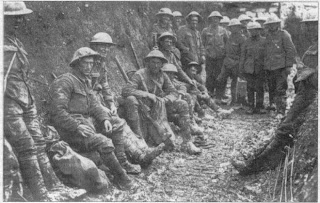 In previous posts, such as In the Trenches I and II I explored the reasoning behind the nature of defensive warfare on the Western Front as with Life on the Line I speculated on what the experience at the front might have been.  I'll attempt to complete that picture by discussing the other aspects of a soldier's life, that of time spent away from the front.  With the understanding that units placed too long at the firing line become less effective, the British and thereby Empire system of rotation in and out of the line was established early and made to be as equitable as possible.  The viewpoint was that a soldier is a resource with limitations so measures were put into effect that on a regular basis men wouldn't be at the front for much more than five to seven consecutive days.  While occurrences of offensive actions, either attacks or defending against enemy movement might require a longer time in the combat area, those units would be relieved by fresh troops as soon as the situation allowed.


The French didn't have such a comprehensive system and their policy of holding units at the front until attrition required relief was one of the grievances which set the "Collective Indisciplines" in motion in 1917.  That the British suffered no such lapse of discipline is testimony to a system that worked well.


The first thing in moving from front to rear which must occur is the manoeuvre known as "relief in place."  While the idea may seem pretty straightforward, it is actually one of the most complicated and risky phases of operation.  The troops leaving will be tired, having been under stress and vigilant during their time forward, those coming in to relieve them may be well rested but not recently familiar with the line.  To reduce enemy observation these reliefs were often carried out at night, but working in the dark has its own detriment.  Sound carries father, and men become more easily lost.  Communication trenches, conduits running perpendicular to and from firing line to the support and reserve lines would become congested and confused.  A dedicated enemy assault at such a time could net on the disarrayed, with the advantage to inflict casualties on two units instead of one and quite possibly catch the front line at a low state of readiness.  The Germans were particularly adept at this and based their "StrossTruppen" tactics which succeeded so well during the 1918 Spring Offensives on such a doctrine of quick gains against an off-balance adversary.


Out of the line, though, men were relatively safe.  There were some sections of front, of course where the rest area was still within striking distance of enemy artillery and aircraft, but it was a fair bit better than being up the line.  The first priority would be cleanliness and rest, once again viewing the soldier as an asset to be looked after in the best way to be kept effective.  Men would bathe, have uniforms cleaned and deloused, exchanged when available and be given a billet. 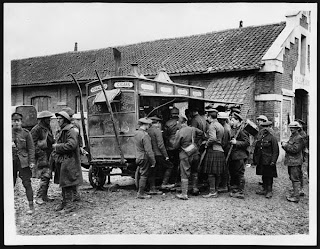 While sports, church services, theatre performances and other amenities such as YMCA, Salvation Army and Red Cross rest centres were available to the men, being out of the line by no means meant a cessation of work.  Fatigue parties which carried supplies and rations up the line were daily occurrences, as were burial parties and the need for Engineers to second soldiers for labour in road building and rail laying.  With that as well was the requirement to carry on with training, stating with small units (Sections, Platoons) and moving onto cooperative exercises with larger bodies (Comapnies, Battalions, Brigades).


Only when on leave did a soldier have opportunity to have completely free time, and though the system of granting leave was aimed to be as equitable and established as that of front line rotation, one soldier was only eligible for a few days' leave in a year.  It was during the routine time away from the fighting that a man had time to reflect, to decompress.  He could write his loved ones, receive his mail and pay, be able to augment his rations with fresh food from local sources, perhaps even sleep indoors and feel some comfort, no matter how short lived.  This period is what made it possible for the troops to once again move towards the line when their turn came.  The realisation that human beings have limitations and enacting a policy to best work within them was a large contribution to victory, and a first step into beginning to understand the psychological effects of war.
Posted by Christopher J Harvie at 05:00