Stick Close to Your Desks

I've never been to sea, so if William and Arthur are to be believed, I'm just waiting for my appointment to the Admiralty.  The sentiment in that lyric is certainly one by both its irony and sincerity which I've held dear from my youth.  I once used it on a friend during an exercise.  The weather had been lousy.  Being infantry we were exposed to it, and he had voiced a complaint.  As his section commander, taking into account that his father was a command grade naval officer, I gave him the two lines as earnest advice.  Once again, though, I have an ulterior meaning to the title.

As I've mentioned, during Remembrance Week, "If Ye Break Faith" will be running daily posts of biographies of Oakville, Ontario men who were Killed in Action during the Great War.  The essays were originally written by high school students from the same area.  It is a privilege to have them, and the ability to bring them to w wide and varied audience.  The essays, in order to account for space, and in some cases content or accuracy will be edited from their existing text.  The credit will be given to the student, and should be extended to Ms. Calvert, their teacher.  I feel she has set an example for history educators by this project.  As part of our expressed purpose, "If Ye Break Faith" would like to encourage more people to "stick close to their desks" to study and understand our past.

Along with the education of history, this project is dedicated to the preservation of our military heritage and supporting veterans both past and present.  While we wait for our not-for-profit status to be confirmed, if there are any causes you feel we should partner with, let us know here.  As developments can happen at any time, its always best to follow us on Twitter and Facebook.

I have a very special thanks to give out along with the usual nod to any new followers since the last post.  "If Ye Break Faith" was mentioned in an editorial list of Top 50 Links for History Tweeters.  The author, Laura Fraser, is also passionate about education and history.  I recommend following her blog.  It is nice to be recognised for what one does, but to be placed among such esteemed others is truly an honour.  Now I really think I do need to get her a coffee.  Least I could do. 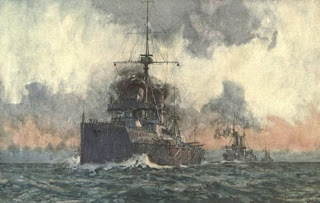 The other side of the phrase used in the title does carry a naval tone to it, and it's here we're going to look at the state of naval power just as the war began.  Following posts (I won't promise them consecutively) on how the war on the seas unfolded and the issue of unrestricted submarine warfare will be upcoming.

From 1799 to 1899, the world had changed so much through emergent technology and industrialisation as not to be recognisable.  Every industry was effected in one way or another, usually through some vast improvement but sometimes through the obsolescence that improvement carries with it.  Ships at sea are conduits for trade, communication and travel.  Improvements made on ship design regarding speed and reliable navigation techniques had helped bring sailing into the modern era.  By mid century, the world was about to be witness to steam power outpacing wind as a preferred propulsion method.  Something else was needed to draw military innovation further, and a short battle fought in shallow water off the coast of the United States proved the catalyst.  The exchange of fire between the ironclads USS Monitor and CSS Virginia in one day made every single other vessel afloat obsolete before sundown.

The shipbuilding industry was thrown on its ear and all the major world powers set to design comparable modern navies.

For none else was this more important than Great Britain.  Being an island has placed a heavy reliance on a strong naval defence, and a globe-spanning empire requires the ability to administer and protect those lands.  At the close of the 19th Century, Britain's mastery of the seas was still unchallenged, and looked to remain so with the unveiling of a new type of ship:  The Dreadnaught.

When people think of a battleship, it's usually defined by the features which the Dreadnaught was the first to sport.  They were big ships compared to their contemporaries.  Their size as well as engines gave the ships tremendous geographic range; they could go, it seemed, anywhere.  It was, though, the ubiquitous turrets, fore and aft mounting several heavy guns each which was the real deterrent.  A bigger ship means being able to displace more weight, ergo heavy guns.  Large guns enable a ship to engage with more powerful shells at longer distances.  A Dreadnaught could out-shoot any other type of ship in its day, and could do so while remaining out of range of replying shots.  Their ability to use these weapons to fire at targets ashore or inland in support of land operations was also worrisome.

For a very short time, Britain had unquestioned dominance of the oceans.

Germany felt the emerging Dreadnaught fleet was a threat both to her national security as well as her small overseas holdings.  If war between the two countries occurred, Britain could snap up the German colonies in Africa and the South Pacific without Germany being able to answer back.  In response to British ship building, and thanks to some effective espionage, Germany began construction of her High Seas Fleet; a number of copy-cat Dreadnaughts to challenge the established supremacy.

Diplomatic ventures to stop the Germans building failed.  By the time war began, two very powerful navies were set to face off against one another.  There could be no real technological advantage, so the naval war, much like the deadlock on the Western Front would have to rely on a more unpredictable variable to bring about victory, the human element.
Posted by Christopher J Harvie at 05:33