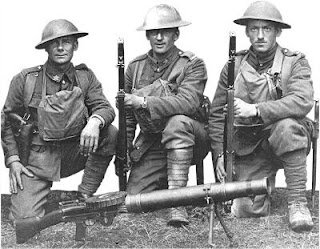 There's something about the term "Canadian Expeditionary Force" that has struck me with a sense of romanticism ever since I first began to study the First World War as a grade school student.  the middle word of the title for the fighting force Canada deployed to the field conjures certain notions, and even still I sometimes can't help to picture, completely incongruously to the war explorers such as Stanley and Livingstone.  There was something of the explorer about them, what is often ascribed as a sense of adventure in their moving into uncertain, new and dangerous territory.  What I want to look at here is the first part of the designation.


Canadian, in this instance, of course, indicates the point of origin and a certain distinctness apart from other corners of the Empire and Britain herself.  Even the fact that there was a separate entity of Canadians within the British military was a hard won privilege.  As Britain had almost exhausted its cadre of highly professional regulars in the opening campaigns of August-October 1914, the Imperial General Staff wanted to take small units from the Dominions piecemeal as they were ready to deploy and integrate them to standing British Divisions.  The idea was sound.  Troops were needed as quickly as possible, sending battalions or even companies as they were trained would plug immediate gaps rather than waiting for larger bodies to be available. As well, placing an untried battalion in amongst others with a little experience helps to smooth out the learning curve.  This did happen in a couple of cases.  The PPCLI, raised privately went overseas and served with the 80th Brigade, BEF before joining the 3d Canadian Division later.  The Newfoundland Regiment, on the basis of being separate from Canada at the time was similarly integrated into the 29th Division.


With the CEF, this looked the way in which it was going to happen as well, even to the point of projecting a policy of assigning individual drafts of replacements directly into British units as needed.  That is did not happen in this way we have to (reluctantly) thank Sam Hughes, the Minister of Militia.  I say reluctantly because Hughes did plenty to the detriment of the force he helped raise.  If not quite a profiteer, he did defer to crony-ism in awarding materials contracts to equip and supply the CEF, often resulting in sub-par or unneeded items issued.  He was just carrying a long tradition in Canadian politics in corruption, since old John A. lined his pocket with railroad funds or John Graves Simcoe adjusted the route of Yonge Street to increase his property values.  On the issue of deploying troops, though, the bombastic Hughes stuck his ground and Canada never took the field in less than Division strength (a unit numbering about 12-15 000 men).  As the war went on we added three more divisions to the effort, enabling the creation of the Canadian Corps by September 1915.  Made up of 1st and 2nd Divisions, CEF it would be four divisions strong by the following year. 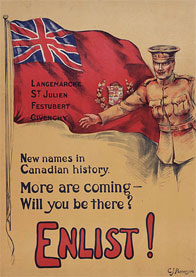 Taken in a certain context the term "Canada" can not, with reflection be a face value definition of its members.  Many were immigrants, mainly from the UK (speaking contemporarily it still included Ireland) or sons of immigrants.  There's nothing strange to this as Canada was a new nation and saw her growth at the time more from people arriving from other lands than were born here.  Perhaps the strong ties to homeland explains why there were a larger number of newer arrivals in the ranks than those who had been in Canada for a few generations.  Looking through the Attestation Papers for Oakville alone pulls up many birthplaces and addresses of next of kin closer to the front lines than to Canada.  The pause for thought is how strange it must have been to say goodbye to a loved one going to live so far away only to have them pass back the same way, often without the opportunity to visit before meeting their deaths in France and Belgium.


These people may not have been Canadian by birth, not unlike many Canadians today, but the effort they made helped to define what it means to be so, as had others before them and those yet to come.

Posted by Christopher J Harvie at 05:00