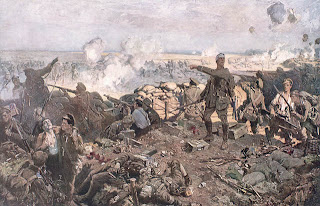 The sun has just come up over the horizon and all is tense along the trench line.  Over the past two days the Germans had made several pushes in the area, but haven't come this way yet.  A mist appears from the wood line to the front, starts slowly rolling on, pushed by a rare westerly breeze. Eyes sting and throats burn as the vapour approached the parapet.  "Stand ready!" the young Lieutenant orders, voiced masked by a handkerchief, his pistol in his other hand.  Ghastly figures materialize from behind the gas. "Targets to the front," is his next caution.  The man beside him drops, coughing, struggling for breath.  The advancing enemy is closer now, moving swiftly but careful to stay beyond their poison.  "Rapid rate," he splutters, "fire!"  Ragged shots bang out at the command while the Colt machine gun begins to chatter.  Aster the first shot, a rifleman pulls the bolt back, then closes the breech.  Bang!  The second shot, a miss, and another quick reload, the Germans nearly on top of the line.  Bang!  This one couldn't miss, they're so close now, his right hand reaches for the bolt, having to move quickly there's less outgoing fire.  The bolt doesn't budge, not with all force applied.  His eyes water, from the gas, from the effort, from the frustration, but the weapon won't cooperate.  A reflective flash of steel catches his eye as the bayonet is thrusted towards him.


I've made mention of Sam Hughes being known for having shady dealings with business associates in the equipping of the CEF.  No one item stands out more than the controversy attached to the Ross Rifle.  It's failures in combat are well documented facts, but the issue of why it failed is still not certainly understood.  The Ross was a great weapon in ideal conditions, range shoots gave it laurels for its function and accuracy.  The fact that it was Canadian as well suited Hughes who had the ostensibly patriotic idea that "his boys" were to be given nationally made equipment.  Although, this allowed him to give contracts to friends of his which surely didn't hurt his bottom line.  At Second Ypres, under the duress of rapid fire conditions, though, the Ross failed miserably.  On the home front, an uproar went out, and blame began to be placed. As often happens, this was not to resolve the issue but rather for some to try to escape culpability. 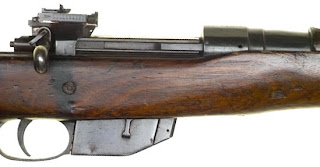 The most commonly cited issue for the rifle jamming is poor weapons maintenance, meaning that the Ross was temperamental in dirty conditions; a situation in abundance on the Western Front.  It's an idea of absolute rubbish.  Any rifle if not properly cared for will malfunction if dirty.  This notion points away from the manufacturer and lends squarely on the troops being negligent.  Another, lesser known issue raised was that the problem was related to the ammunition being defective.  since the same .303 cartridge was being used by the Canadians with the Ross as well as the British Lee Enfield which didn't suffer from the dame critical issues, problems stemming from ammunition can be discounted.  A third flaw could have been the bolt being a straight pull mechanism.  Since it didn't require the locking quarter turn more common in rifles of these types it could be surmised that a lack of leverage made jams more frequent and harder to clear. Again, though, other straight pull designs from Austria and Sweden are not prone to the same frequent stoppages.  I am led to believe that the case was a manufacturer's fault which had been gently brushed aside in favour of deflecting where blame should lie.


The bolt and the receiver-where the bolt meets the chamber to seal the breech-may have been tooled with different tolerances.  What this means is that under range conditions, firing slowly and carefully aimed shots, the Ross worked well, but quick firing and the resultant heating and expansion of metal parts at different rates without chance to cool slightly would cause a weapon to stick.


The Ross was not phased out until 1916, in favour of the Lee Enfield, and even remained a weapon of choice for snipers and a popular weapon for collectors today.  It did, though, go a long way to the detriment of Canadian manufacturing.  Conversely it added to the reputation of the CEF as a unit still capable of successful operations with non-effective equipment, quite unironically a reputation that stays with the Canadian Forces of the modern era.
Posted by Christopher J Harvie at 04:47