Things here are still moving slowly forward, and the gains I've made in the last two months since this project was initiated have been more than worth the effort I've put forward thus far.  Which only goes to indicate that if I put forward more effort, the results will be that much more rewarding.  I have plans to shortly roll out a weekly video blog in order to reach a wider audience, and that will be in cooperation with this column, my Facebook group, Twitter feed and the upcoming content which will soon be available on ifyebreakfaith.com.  Again, I pass along my appreciation to all my followers and supporters, old as well as new.  Feedback is always well received, and I am open to suggestions for topics for discussion on this page.  Submit your ideas here.  If I use your idea, I will be certain to mention your input. 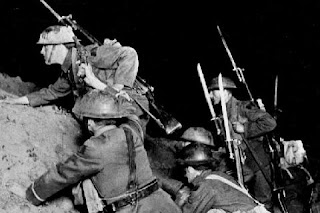 The nature of fighting battles and winning wars is to eliminate your enemy's ability to fight.  Even more simply put it is the goal of an army to close with and destroy the enemy.  That exact phrase is the stated role of the infantry, those at the forward most edge of battle, the rifleman, foot slogger, ground pounder.  It is the infantry's task to take the fight to the enemy, and that aspect of warfare hasn't changed for thousands of years.  Saying that, close your eyes and picture the first thing that comes to mind when the First World War is mentioned.  Perhaps it was something along the lines of a group of men, standing in a deep trench, soaked with mud and water with weapons at the ready, preparing to charge the enemy across a shell marked no man's land.  I'll not debate your visualisations, but I do wish to point out that while an army's purpose is dedicated to the infantry, it takes so much more than that to prosecute a war; many individuals and jobs that tend to be overlooked from time to time but absolutely essential nonetheless.

Known as "supporting arms", their work ensures that those on the front line can do their job.  Of course the attention is paid to the ones doing the fighting and in my own personal experience it was that ideology which had me select the infantry as my trade when I joined the army in 1994.  We of the "PBI" do tend to look down on those who we derisively call REMF's (I won't elaborate, but you're free to look up the acronym if you don't understand it.)  Even looking to tell stories of the war, more people prefer to learn about the fighting and conduct of battles rather than the logistics and administration that goes on behind the lines.

In one way of looking at it, in an effort of fairness, those in the supporting arms are no less heroic than their colleagues at the sharp end.  Men can not fight without bullets for their rifles, food in their bellies and clothes on their backs.  Often, they will not fight without pay or the knowledge that someone will fetch them back and care for them if they get hurt.  I met a man from Sweden once, a pacifist who had volunteered to be a cook when called up for national service.  "I not like to fight," he told me, "so I make food.  When I give food, I make happy."  As someone who has been a the receiving end of a hot meal in my canteen cup after a miserable "day out" I knew straight away what he meant. 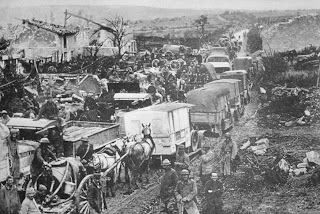 In the First World War, the efforts of the supporting arms were nothing short of epic.  At the time, the administration was having to deal with armies much larger than had previously existed, care for and supply it on a level heretofore unknown.  In sometimes appalling conditions they struggled to keep roads open, built new ones and constructed railways. Under fire they risked themselves to get essential supplies to the fighting front.  They rushed out into the danger area to care for the wounded, and ensured as best they could that men would be able to bathe, get clean clothes and rest out of the line.

It was more likely to be killed in action as an infanteer than any other branch of service, and more likely that those behind the lines would lose their lives to accident or illness than to enemy action.  The essential nature of their work and dedication to their task in no small part made winning the war possible. Because of this the losses they incurred are to be held in as high an esteem that we typically only tend to apply to those on the front.


On a lighter note, via Reddit.com user tommygunner91, I give you a short paragraph analogising the First World War as a bar fight.

Germany, Austria and Italy are standing together in the middle of a pub when Serbia bumps into Austria and spills Austria's pint. Austria demands Serbia buy it a complete new suit because there are splashes on its trouser leg. Germany expresses its support for Austria's point of view. Britain recommends that everyone calm down a bit. Serbia points out that it can't afford a whole suit, but offers to pay for the cleaning of Austria's trousers. Russia and Serbia look at Austria. Austria asks Serbia who it's looking at. Russia suggests that Austria should leave its little brother alone. Austria inquires as to whose army will assist Russia in compelling it to do so. Germany appeals to Britain that France has been looking at it, and that this is sufficiently out of order that Britain should not intervene. Britain replies that France can look at who it wants to, that Britain is looking at Germany too, and what is Germany going to do about it? Germany tells Russia to stop looking at Austria, or Germany will render Russia incapable of such action. Britain and France ask Germany whether it's looking at Belgium. Turkey and Germany go off into a corner and whisper. When they come back, Turkey makes a show of not looking at anyone. Germany rolls up its sleeves, looks at France, and punches Belgium. France and Britain punch Germany. Austria punches Russia. Germany punches Britain and France with one hand and Russia with the other. Russia throws a punch at Germany, but misses and nearly falls over. Japan calls over from the other side of the room that it's on Britain's side, but stays there. Italy surprises everyone by punching Austria. Australia punches Turkey, and gets punched back. There are no hard feelings because Britain made Australia do it. France gets thrown through a plate glass window, but gets back up and carries on fighting. Russia gets thrown through another one, gets knocked out, suffers brain damage, and wakes up with a complete personality change. Italy throws a punch at Austria and misses, but Austria falls over anyway. Italy raises both fists in the air and runs round the room chanting. America waits till Germany is about to fall over from sustained punching from Britain and France, then walks over and smashes it with a barstool, then pretends it won the fight all by itself. By now all the chairs are broken and the big mirror over the bar is shattered. Britain, France and America agree that Germany threw the first punch, so the whole thing is Germany's fault . While Germany is still unconscious, they go through its pockets, steal its wallet, and buy drinks for all their friends.

Posted by Christopher J Harvie at 04:57