Why, and Why Now?


I've been thinking a great deal about a letter I received last week.  First, I'm very flattered by the compliments on my writing and the interest it's generating.  At the same time, the questions that were posed deserve an amount of reflection on my part and how I answer them serves to show the importance of what I've set out to achieve. 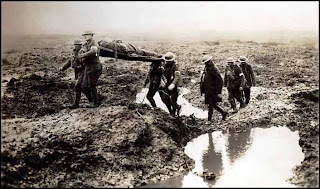 In light of a resurgence of study and popular thought on the First World War, I was asked why I was choosing to embark on my work, and why I had chosen this conflict as my focus.  Perhaps it's simple enough for me to say that this was had always held me in fascination, but the question as poised forced me to think on why it did so.  From a historical perspective, both in a global as well as a national sense it is easy to view this as a crucial event that had long and far reaching consequences in world affairs.  In certain regards, the war, its conduct and conclusion still effect the geo-political situation at present.  For an example of proof, I invite you all to think about the Middle East today and realise the boundary disputes and balance of power issues endemic to the area stem directly from the events of 1914-1918.


For me, it has not always been a point of the importance of the war in world affairs.  As a young child I had very typical if not naive views of war.  The notion of gallantry and glamour, of abject courage in extreme conditions struck a rather romantic chord with me, perhaps in much the same way that young men viewed the war as it was beginning and those dreamy notions coupled with a patriotism not easily found today is what filled the queues at recruiting offices nearly one hundred years ago.  I've always had a bit of a rose-tinted vision of hard fought struggles, evidenced by my other studies of Operation MARKET GARDEN and the action at Rorke's Drift in Natal Province in 1879.


As I've matured, I would like to think that I've become more objective and understanding.  Though I believe that to be completely objective one cannot divorce entirely from virtues of gallantry and courage as long as its tempered with an equal consideration of the suffering and cruelty which encompass the whole spectrum of human conflict.  To do so would be to devalue the most important aspect of history in my opinion in that it is the study of humanity. 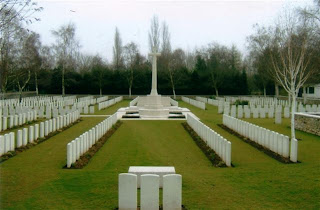 As to the other part, the "why now?" question, that for me is a much more straight forward answer.  The cusp of the events moving from a living memory towards a distant past is well upon us and my feeling is that the importance of the war in a global, national and especially personal sense needs to be preserved with the reflection of these aspects lest we lose touch with part of our story and the lessons to be gained from a broad understanding of the past.  My idea, the project's aim of documenting the stories of those lost to the war, is my effort to maintain that link in a relatable way between the past and the present.  I strongly believe that we owe a great debt to those that gave their lives and to remember them well is a small step to repay them.  The larger balance of payment would be, of course, to ensure that their loss was not done in vain and we collectively will be able to realise their dream of living in peace.

Posted by Christopher J Harvie at 05:00