A while back, I posted "Mutual Support" an article based on links to people businesses and charities that either have helped this project itself, work towards a similar end or have an interesting and unique way of promoting historical learning themselves.

In the intervening time since the last support post, I've picked up so many new people to follow, and followers that I feel the need to revisit this style of post.  Many of these connections I have made through Twitter, where I can be found as well, with a slightly lesser number that socially network only through Facebook.  I will freely admit to having a very low opinion of Twitter before I began my work here.  I saw the limitation present in the 140 character tab, and much of the content that I was aware of seemed to be based on the banality of famous people reporting on doing ordinary things; superseded of course by the banality of ordinary people reporting on doing ordinary things.  This has been  a good week for me to open up on some of my biases, come to think of it.

Turns out that for my purposes, no better tool giving me the ability to build and inform a mutual network has worked for me than has Twitter. 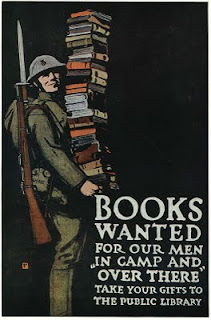 While I'm at this, I just want to express my gratitude to all of you who have given your support through following my work, posting comments and suggestions as well as the occasional compliment.  No less of a thanks should go to anyone who has read an article on this page and walked away with further knowledge on the subject of the Great War than they had before reading.  Perhaps it comes from a lack of validation earlier in life, but I do get a real kick out of having an "audience."  All of you out there have given me a gift of gentle reassurance that the contribution I am attempting to make is worthy of notice. All of the links below, and many others to whom I've linked before or mentioned in some other way have done more to push me towards my vocation than I could have managed on my own.  I may be responsible for the content and direction of "If Ye Break Faith" but it is you who visit this space and read the articles that give this work its right to exist, and inspire me to continue to perpetuate the goals the project was founded upon.

So, to all I mention here, have mentioned before, and especially those whom I have neglected to mention, an immense "thank you" for all is heartily given and well deserved.

I'm going to start with The First World War, a Twitter feed that posts links to interesting articles and archives on the war.  It seems they've just begun to post, so I encourage you to follow them to gain some unique insights via the writing they promote.  In a similar vein is GreatWar FourteenEighteen, a Facebook page that is promoting an essential reading list of more than a thousand titles on the subject of the First World War.  The work done there is a valuable resource for finding research material.  Military Heritage is an UK based online promoter and retailer of military memorabilia from the Great War.  First World War Centenary, supported by the Imperial War Museum (my absolute favourite museum in the whole wide world, btw) is gearing up to promote the upcoming 100th anniversary of World War One.  Trench Tweets offers snapshots of information on the war, linking to source articles.  Active History is a teaching and learning resource that's choc-a-block with work sheets and projects for young students, a great start for educators looking to include multimedia resources to their lesson plans.  Then/Hier is a Canadian based history resource that has just announced an upcoming conference on history education taking place in Halifax, Nova Scotia.  For anyone looking to get me something nice for my birthday two months ago, sending me to this conference would be a great start!  Rifleman Tours, based out of the UK offers small group excursions to the battlefields of France and Flanders.

History In An Hour offers a variety of titles on a wide range of historical subjects suited for handheld devices and e-readers.  They've just re- launched with Harper Collins, and I have a proposed title in for their consideration, so I'll keep you all up to speed on that.  Skirmish Magazine and its partners are a wonderful resource for the living history and re-enactment communities.  Osprey Publishing bills itself as "The Destination for Military History."  Given their catalogue, it's hard to broker argument.  Warfare Magazine is a young e-publication that has just pushed it's third issue.  I encourage you to take a look, as they do great work and I hope to see them continue on their early success.  The History Press Ireland offers books on general history as well as niche subjects particular to Ireland.  A little known secret about me is that if I couldn't be Scottish, I'd have liked to have been Irish.  The Celtic tradition of storytelling is very much alive in me, and Ireland has had a very colourful history. THP Ireland is an offshoot of The History Press, the UK's largest local and specialist history publisher.  Soldier Magazine is the official publication of the British Army, an informative source for the UK military in both the present context and the past.  Amber Books is another publisher of a large variety of history related titles.  Tommies Guides not only promotes and publishes military history titles, but offers services to aid in the publishing process.  I wonder if they've caught wind of "Iron Spirits" yet?  Pen and Sword Books also offer a wide range of titles on history, both military and general.  Regimental Books is an Australian based military history publisher who also posts interesting links and pictures of Australia's military past.  Lou Reda Productions produces and distributes award winning films on a wide range of historical topics.

Not to be forgotten are the organisations that promote and preserve history.  These sites, whether privately managed, done so on a charitable or not-for-profit basis, or government initiatives all embody the values and principles that I with "If Ye Break Faith" try to uphold.  In Memoriam 2014, The UK Battlefields Trust, Commonwealth War Graves Commission, New Zealand Military History Society, Australian War Memorial, The Western Front Association, Calgary Military Museums Society, Honour our Forces, Last Post Fund, For the Fallen, Poppy Support, and The Vimy Foundation all have my admiration for the work they do and the history they perpetuate. 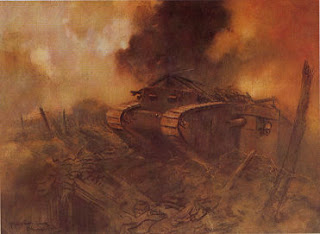 Now, if I have overlooked anybody I apologise for my oversight.  I hope you would post me an email, or a comment so that I might make up for not including you in the above lists.

On a very special note, I would like you to join me in wishing a very happy 120th anniversary to the 48th Highlanders of Canada, my old Regiment.  No finer body of troops exist, in my opinion.  To all my old comrades, and especially to my fallen comrades I want to express the motto Dileas Gu Brath.  Now, and forever.
Posted by Christopher J Harvie at 07:18