Thinking Globally About a World War

Well, this one might be a bit touch and go in getting it out on time.  The main stumbling block here is that my ISP hasn't quite realised that I've paid my bill.  Customer service has been little help, refusing to access my account because according to them I don't know my own birthday.  While we're at it, how is it that every time I request to speak with a CSM to escalate my issue to a satisfactory resolution, I get a hedging excuse or even a refusal?  Short story here:  If this update posts later than usual, I urge you to take the issue to Wind Mobile.  The solution to my problem is that I have to make the time to go in person to the retail location and adjust my account there.  Fortunately I'm neither too busy nor too far away.  It begs the question of what if that wasn't the case?  I make my (unpaid) living through the internet, so a consistent and fast connection is a must for me, and unfortunately I'm tied into a sub-standard provider on economic grounds, but I don't think I should suffer ineffective service based on that.

I'd love to update you all on what's going on, but without being online, I've got no idea what's going on.  Follow me on Facebook and Twitter to keep up to date with news and announcements, with any luck today's SNAFU will be cleared up soon. 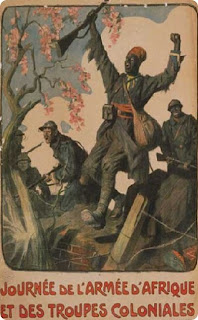 Once again, I'm taking a suggestion on board.  In my post A True Global War we looked at the First World War in theatres beyond the Western Front.  A friend of mine pointed out that I should examine the efforts on the Western Front of a military asset too often overlooked: That of the colonial forces.  My own Euro-centric bias is quite clear as I really haven't given these men the credit due them, and in doing so, I am ignorantly allowing their marginalisation to continue.

Both Britain and France had large colonial holdings at the turn of the 20th Century.  It had long been the practice of both powers to raise, train and equip locally procured units.  The manpower was readily available and having native contingents freed up the necessity to garrison large numbers of troops from home overseas.  Their existence was primarily to act as a deterrent for internal unrest against the colonising power as much a a force for defence against external incursions.

As war came about, the availability of these units was a tremendous asset to the Allies.  France was faced with recalling reservists back to service, and hastening the training of recently inducted conscripts.  Fully trained and outfitted regiments from Western Africa and South East Asia could be put into the line in Europe just as soon as they could be transported.  This addition of resources certainly helped to shore up numbers facing the larger German presence.  Britain had at her disposal her Indian Army along with other colonial troops.  With her own manpower shortages based on a long practice of voluntary enlistment, Britain also was able to increase her fighting presence by shifting troops from an unthreatened sub-continent to the European Theatre.  Another source of manpower, mainly Chinese labourers working for the war effort in road and rail construction but not actually inducted to the military freed up fighting troops from fatigue duties.

It takes more than numbers to win a war, and one thing that victory does require is fighting quality.  This is an issue of debate which can be a bit touchy to light upon when looked at subjectively.  During the war there were several instances of colonial troops being routed or abandoning positions in the face of heavy resistance.  A notable example of this would be the collapse of Moroccan and Algerian units at 2nd Ypres.  Conveniently forgotten is that these men had just absorbed the first poison gas attack in modern warfare.  I don't think it's fair to view their retreat as anything less then men reacting to an unprecedented situation; to place emphasis on the point of origin of these soldiers is entirely unfair.  While there were colonial elements that suffered from poor discipline or lacked elan, the same could be said of elements of national forces. 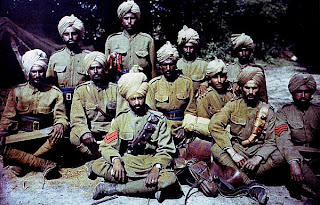 In some cases, colonial troops proved the better.  Many units of the Indian Army, particularly it's cavalry were highly motivated and experienced.  Several actions involving these men during the war were some of the finest execution of mounted tactics the world would ever witness.  The reasoning for this might set some people a bit twitchy, but even ugly truths need to be pursued.  Colonial forces, based upon ethnic lines, could and were viewed as less valuable on a human level than home units.  Able to assign a certain dispensability to them, colonial units were often chosen for difficult and prospectively costly actions.  Enduring these hardships helped to forge the best of these forces to an elite standing.

Perhaps then the two things that make the Great War a global conflict is partly where it was fought, but also relies a great deal on who was involved in the fighting.  We may not tend to spend a great amount of time in their recognition, but without the assets the colonial units brought to the war, the outcome of the conflict would have been very different indeed.  I think that these soldiers, and the actions in which they made their names should be given a closer look here.  I have to admit to not knowing enough about the topic that I will have to research it further before I can relate detail.  In the mean time, coming up I've got some great topics to share with you all.  If you've got a suggestion, comment or a question, it can reach me via email.
Posted by Christopher J Harvie at 05:00