The Rise of Fall

One other thing of note in being able to spot trends in the traffic to this page is the ability to know when something is not well received.  "Over There" went over lead balloon style.  I myself am not entirely satisfied by it.  I will admit rushing the copy, on the return that I was working on a great opportunity; hopefully more about which soon.  I'm still taking great pleasure in gaining new followers  One that really has my admiration is Sapper O'Brien.  There are other diaries I've come across, particularly Haig's War which enlightens perspective on a complicated and powerful man.  While I enjoy that insight, what speaks closer to the heart of this project is history seen through the eyes of a relatable everyman.  Both feeds are on Twitter, where you can also get updates and news regarding "If Ye Break Faith" and the recently announced supporting title "Iron Spirits".  This page is also linked to through Facebook. 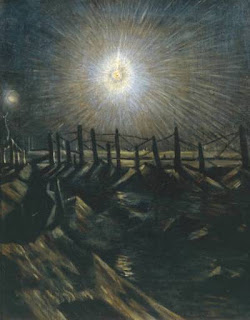 It's Thanksgiving in Canada.  What this brings to mind for me is that Remembrance Day is in a month, and it is usually at this time of year when I was at school that thoughts and study were on the First World War.  The way in which I tended to associate this was by placing my own surrounding environment, particularly the weather in my visualisations of the past.  From certain photographs, trees blasted bald from shellfire resemble those shed for fall, and having a blue shy register as grey in black and white does make the war look as though it was fought in a perpetual autumn.  Of course, that isn't so, but what did transpire in the five fall seasons the war witnessed were events that would define the direction of the conflict.

From the 19th Century, long into the past it was traditionally accepted that armies did not campaign in the winter.  Usually owing to a drain in manpower for the harvesting season, opposing forces would garrison in the fall to wait out the cold weather ahead, take on replacement troops, work on training and preparing equipment to resume is better weather.  There are the exceptions to this, Napoleon's excursion into Russia and Washington's raid across the Delaware to name two examples quick to mind.  The Western Front also experienced what could best be described as a lull in winter, though fighting was more or less a constant for the duration; it is a question of scale.  The cold weather made large offensive operations difficult, but terrible weather is ideal for raids and patrols, and artillery suffers little below freezing.

There seems, upon reflection always a bit of a rush of activity as each autumn of the war cam on.  Reasons for this may be partly coincidental, but mostly it has to do with tactical desires to achieve war aims before the onset of winter would upset momentum.

In 1914, what would become the Western Front was stabilizing, and all sides were under pressure to complete entrenchments on the best ground possible before the earth froze and digging was made a more laborious prospect.  The opening campaigns of manoeuvre had stretched all sides in logistics and manpower, so remaining in place and building up strength  over the winter months was the priority all 'round, and plans for the re-opening of offensives in spring 1915 occupied the upper echelons of command.  The one event that the winter of 1914 is best known for is the spontaneous and unofficial "Christmas truces" that occurred along the line.  I'll save that topic for a more timely post.

The next year saw very little had changed.  The limited attacks along the Western Front had made negligible progress and campaigns attempted in other theatres had either failed or not produced the desired results.  Once again, the winter was a time to reflect and plan ahead; this time for the Allies a coordinated offensive on all fronts, and the Germans finalised their design for the attack on Verdun.  Britain's industry was racing against time to increase output for the demands the army in France was placing on it.  Measures had been put in place to ensure a proper level of supply, but just as that was occurring, Britain was planning the largest battle she had ever fought, and was truly stretching her resources to the limit of their capacity to produce.  Restricting operations over the last months of the year held important material in reserve for the battle which would occur the following summer.

1916 was a bloody year, and when the campaigns at the Somme and Verdun wore down, the focus for the Allies was absorbing the lessons these battles had taught, and implementing them through intensive training.  The Germans began work on the Hindenburg Line in response to new theories of defensive operations.  This included the idea of a resolutely held but thinly manned front line, the bulk of forces held in the rear for quick, flexible counter attacks.  It was based on the nature that the front defensive works, employing crew served weapons like machine guns and mortars with good communication to the rear via artillery observers could reasonably be held against infantry assault with less manpower.  Moving to the Hindenburg Line would collapse about fifty kilometers of frontage for the Germans.  With these two factors in place, there were now more men in reserve to commit to strong counter attacks, the idea being to keep repelling assaults and using those reversals to their advantage. 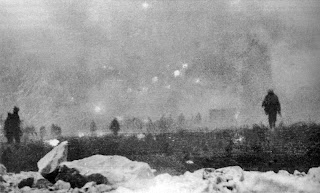 The fall and winter of 1917 saw the Allies in a particularly good position.  Britain's offensives had gained crucial ground, in spite of the French stagnating under collective indisciplines, and the German withdrawal to the Hindenburg Line gave even more territory over to Allied hands.  The Americans had entered the war and the next spring was optimistically looked towards.  Events on the Eastern Front gave the Germans the ability and winter afforded the time to shift troops east to west for an anticipated all-out offensive in spring before the U.S. could take to the field in force.

These attacks had initial success, but were responded to well and contained.  As fall of 1918 approached, the German army in the field was quickly losing effectiveness, and facing casualties it couldn't replace.  The naval blockade of Germany would mean another lean winter for those at home.  Knowing that their army and people faced collapse if the war continued, Germany brokered for armistice rather than face another war winter.

On Thursday, I plan to look at the contribution to the war of often overlooked combatants, the Colonial Forces.  If you have any questions comments or suggestions please post them here.
Posted by Christopher J Harvie at 06:02