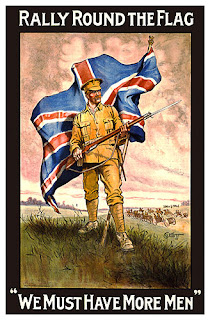 Being in a dire position had me thinking about a phrase from World War II that's recently become popular again:  "Keep Calm and Carry On."  I had heard there some copyright controversy about it (story here), so the words were fresh to mind.  They sprang up unbidden when I checked my balance the other day.  It's a reassuring thought, and so much better than the blind panic I usually employ at times like these.  It's also, if I can be a bit glib, a very British sentiment.  It smacks of "stiff upper lip"; the stoic and redoubtable nature of what is believed to be a trait endemic to the British people.  Had the phrase been developed in America it may well have been "Keep Calm and Kick Ass."


The words, as a public appeal are WWII vintage, but it has inspired me to think about civilian attitudes during the First World War.  I covered this in a small way with my post "The Home Front" but wanted to revisit it to investigate the necessity of influencing the civil mindset during a time of crisis.


There is a balance crucial to the effort of a country at war.  A government accountable to it's electorate requires civil support of military endeavours.  It's a difficult prospect as the majority of the population don't have a fundamental understanding of armed conflict and the requirements thereof.  Your average citizen, however, understands completely the concepts of fear and pride.  A government can, by either overt or subtle means engage these emotions in the people in order to manipulate popular opinion towards supporting a war effort.


The easiest way for Britain to keep its population in check was also a tried, tested and old method.  Allowing civilians to believe an invasion is not just probable but imminent will do several things:  Keep civil traffic to a minimum, inspire recruitment and ensure industrial output.  The threat of a hostile invasion of the British Isles has been a frequent concern for millennia, going back much further than1066, even.  It has the added bonus of inspiring confidence in the government when the invasion doesn't happen.  To this day, for example (and revisiting WWII again, briefly) people see the Churchill government as one which staved off the inevitable Nazi landings.  Never mind, of course that Germany was completely incapable of mounting such an endeavour.  Operation SEA LION was a pipe dream, but the threat it created did serve to cohese the home front. 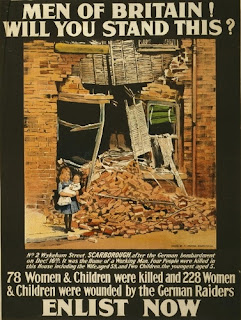 The ability of the enemy to strike from the air gave a new facet to warfare, and another means by which to exercise control and mould opinion.  Blackouts conserve resources like fuel oil and electricity and the tragedy of civilian deaths helps to paint the enemy in inhuman colours. The reality was though, that air raids, while possible, were neither as frequent nor as damaging as was generally perceived; and while there was outcry and indignation about the terror attacks the Germans were making on ordinary British people,at the very same time the Royal Flying Corps was engaged in the same business over German cities.


The opportunity during war for propagandists to sway opinion is rife.  Gentle suggestions to conserve and ration, appeals to men's sense of duty and fear of being shamed to drive recruitment placed with out and out lies of enemy atrocities will keep the masses cowed and behind the war machine, an easier prospect then when media communication was rudimentary with no reliable source for rebuttal.  Sewing suspicion about spies or fifth columnists can even enable a government to act against groups within that it feels a threat.  This leads to a hyper-vigilant population, who will act as  unpaid agents of the government's agenda.  The extension of this is what occurred both in the UK and Canada, as well as other countries, the suspension of rights and internment of "enemy aliens."


As civil support is necessary to a successful war effort, the government must take action to ensure that support.  The question of the morality of such methods I'll leave open for discussion.  Post your thoughts, comments, opinion or suggestions here.


Do you have a topic you'd like to see, or perhaps some expository writing on World War One in need of a venue? Please let me know, I look forward to hearing from you.
Posted by Christopher J Harvie at 03:48