We are going to forward an appeal from Regimental Books who are gathering source material for a study on the Royal Australian Armoured Corps.  If you have any photos, journals, diaries or any other primary resources that might help, please follow the link above; they would be grateful to hear from you.

As always, you can keep up to date with this project by following us on Facebook and Twitter. 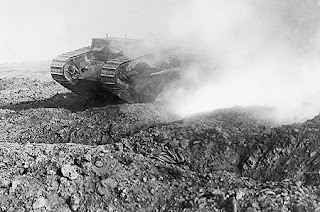 It's rather fitting, considering the nature of the appeal that today's discussion topic is going to focus on the genesis of modern armoured warfare.  Last time, we visited the reasons behind the emerging obsolescence of horsed cavalry.  Even before this began to take place, and in light of tactical conditions facing commanders on the Western Front, it was realised that something would have to be introduced not only to replace the horse as an instrument of battle, but succeed it where it couldn't by its nature meet the requirements of warfare as it was evolving.

British military engineers, under the direction of higher command were set to task to develop a solution.  At first, this was initiated by the Admiralty as it was their vision to design "landships."  The engineers were required to invent something which could move and manoeuvre at speed over broken ground; withstand small-arms fire; cross wire obstacles and trench lines; and deliver the fight to the enemy.

Such a vehicle, if it could be built was envisioned to grant tremendous advantage to whomever had them available against those who did not.  To preserve this advantage, development was blanketed under great secrecy.  The prototypes were built with the ruse that they were in fact mobile water carriers, and it is from that  deception we get the word tank in reference to an armoured vehicle.  The men who were to crew these weapons and the tanks themselves fell under the command of the intentionally beguilingly named "Heavy Branch" of the Machine Gun Corps, which only later took up the mantle of the "Armoured Corps."

Two types were developed, the "male" armed with two six-pounder guns (the name refers to the weight of the shell it fired) and three machine guns.  The "female" variant eschewed the heavier guns and only mounted four machine guns.

Despite perceptions of anachronistic generals not possessed of forethought, the tank was greatly anticipated.  Haig and his commanders were eager to use this new weapon as noon as opportunity and available numbers existed.  While it may have been wise to wait until design issues had been resolved and a larger number of tanks completed and delivered, the situation along the Somme in the autumn of 1916 called out for any advantage the Allies had to breach the stalled offensive.  Surprise above reliability and numbers was trump in this case, and on 15 September the 49 tanks which had been delivered to date were slated to go into battle, securing the flanks and in direct support of the infantry advance. 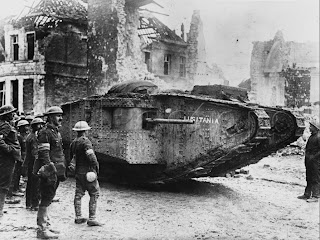 Surprise was perhaps the only advantage.  The majority of tanks failed to cross the start line due to mechanical issues or becoming stuck.  Those few that did make it forward largely stunned and panicked the German defenders.  More damage was done perhaps psychologically by the mere presence of these steel monsters than was done by their firing power.

These first tanks went a long way to achieve the purpose to which they were designed, but were only capable of fulfilling that to a degree.  The technology simply didn't exist at the time to ensure mechanical reliability, or to provide for a means of instant communication to coordinate efforts with artillery, infantry and air assets.  Once the initial shock of the tank had been absorbed, those that faced it initiated methods to cope with it, either by creating obstacles a tank couldn't ford or by re-purposing artillery to serve in an anti-armour role.

It may not have had as much sway in the outcome of the war as first was hoped, but as an element of the modern battle, the tank had arrived.  It would take a further generation of development to overcome the issues which forestalled its success in the Great War to come into its own as a fighting arm.  Perhaps not ironically, it was those who first understood the shock value of armour by being on its receiving end that would master the potential of its use; especially in co-operative operations known today as AirLand Battle, but sounding more ominous in its inceptive phraseology:  Blitzkrieg.
Posted by Christopher J Harvie at 05:08